Australian house prices officially grew by 13.5% over the past 12 months, making it the most significant annual gain we’ve seen since 2004. Once again, houses have strongly outperformed units, with Sydney, Hobart, Darwin, and Canberra the standout performers over the last financial year, seeing gains of nearly 20% across the board, according to the latest data from CoreLogic.

In June, dwelling values increased in all the major capital cities and regional Australia; however, certain areas are starting to see momentum slowing down. Each capital city saw an uplift in dwelling values, ranging from a 3.0% rise in Hobart to a more subdued 0.2% increase in Perth. 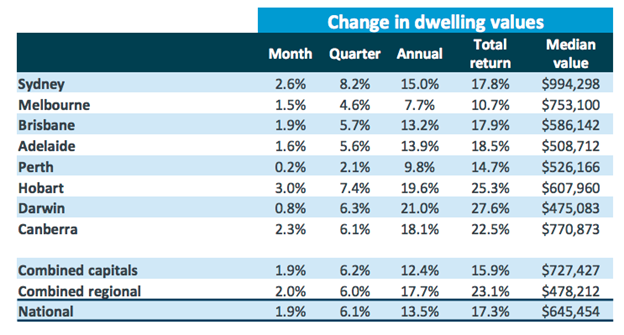 It continues to be the top-end of the housing market, particularly in places like Sydney and Melbourne, leading to the uptrend in price appreciation. Notably, the bottom end of the market, generally built around the first home buyer market, has clearly started to ease off.

Much of the gains from this end of the market came on the back of the numerous Government incentives, which effectively bought demand forward.

The record low cost of finance continues to be the main driver of the upper end of the market, along with the fact that supply levels are still very tight. 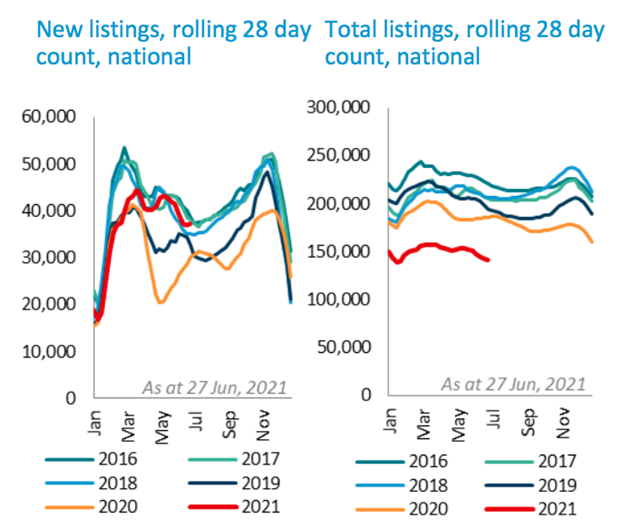 “The latest listings count from CoreLogic indicates that in the 28 days to June 27th, total advertised stock remained 24.4% below the five-year average. This dynamic of strong consumer demand, and low housing supply, continues to create some urgency among buyers.”

The loss of momentum is seen most clearly in the two mining states of WA and the Northern Territory.

“The key to understanding the softer performance in these resource-based markets may be a slightly different supply-demand dynamic compared to the other capital cities and regions,” says Ms Owen.

“CoreLogic monitors a ‘salelistingslistings’ ratio, which divides the monthly volume of settled sales by new listings brought to market. For the past three months, the sales to new listings ratio has averaged 1.1 across Darwin and Perth. While the implication is there, there are 1.1 sales for each new listing, which could elicit further growth in dwelling values, these are the lowest sales to new listings results of the capital city markets.

Billionaire Richard Branson reaches space in his own ship