PayPal has been talking about its “super app” plans for some time, having recently told investors its upcoming digital wallet and payments app had been given a go for launch. Today, the first version of that app is officially being introduced, offering a combination of financial tools, including direct deposit, bill pay, a digital wallet, peer-to-peer payments, shopping tools, crypto capabilities, and more. The company is also announcing its partnership with Synchrony Bank for its new high-yield savings account, PayPal Savings. 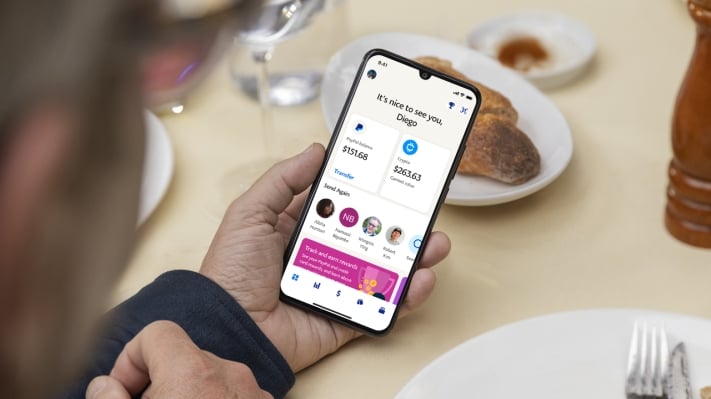 These changes shift PayPal from being primarily a payments utility tacked on other offerings here and there to be a more fully fleshed-out finance app. Though PayPal itself doesn’t aim to be a “bank,” the new app offers a range of competitive features for those considering shifting their finances to neobanks, like Chime or Varo, as it will now also include support for paycheck Direct Deposits through PayPal’s bank partners, bill pay and more.

By enabling direct deposit, PayPal users can get paid up to two days earlier, one of the bigger draws among those considering digital banking apps over traditional banks.

In addition to shifting their paychecks to Payal, customers’ PayPal funds can be used for things part of daily life, like paying their bills, saving, or shopping.

The enhanced bill pay feature lets customers track, view, and pay bills from thousands of companies, including utilities, TV and internet, insurance, credit cards, phone, and more, PayPal says. When bill pay first arrived earlier this year, it offered access to (single-digit) thousands of billers. Now, it will support around 17,000 billers. Customers can also discover billers through an improved, intelligent search feature, set reminders to notify upcoming bills, and schedule automatic payments for bills they have to pay regularly.

The bills don’t have to only be paid from funds currently in the PayPal account but can be paid through any eligible funding source that’s already linked to their PayPal account. Via a Synchrony Bank partnership, PayPal Savings will offer high-yield savings account with a 0.40% Annual Percentage Yield (APY), more than six times the national average of 0.06%, the company says. However, that’s lower than top rivals in the digital banking market offer, like Chime (0.50%), Varo (starts at 0.20%, but users can qualify to get 3.00% APY), Marcus (0.50%), Ally (0.50%), ONE (1.00% or 3.00% on Auto-Save transactions), and others. However, the rate may appeal to those switching from a traditional bank, where rates tend to be lower.

Apple iPhone 13 Review: The Most Incremental Upgrade Ever