Heavy rainfall and damaging winds are expected to hit Victoria on Tuesday as a nightmare weather system wreaking havoc in NSW dips further south. The weather bureau has issued severe weather and flood warning for parts of eastern and southern Victoria.

“A deepening low-pressure system will move southeast across NSW (on Tuesday), reaching the southern NSW coast late tonight then becoming slow-moving over the eastern Bass Strait on Wednesday,” the bureau said.

Peak gusts to 110km/h are possible about the southern Gippsland coast.

Locations likely to be affected include Wonthaggi, Mallacoota, Cann River, Chandlers Creek, Combienbar, and Bonang. The bureau said heavy rainfall could lead to flash flooding during Tuesday afternoon and evening.

Senior meteorologist Richard Russell said the system would increase rainfall across east Gippsland before spreading into southern Gippsland, particularly the Strzelecki Ranges and the Otway Ranges.

“(On Tuesday) we‘re looking at this low-pressure system rapidly intensifying across NSW, and it will track quite quickly towards the south coast of NSW by late Tuesday afternoon and early evening,” he said.

It will intensify further and then move over the East Gippsland coastal waters, where it sit for most of Wednesday before finally moving away. He said from midday Tuesday through to Wednesday night, localized rainfall totals of 80-120mm were possible east of Orbost, with 150-200mm possible about the Strzelecki Ranges and Wilsons Promontory, and 100-150mm possible about the Otway Ranges. The heavy rainfall that we’re looking at could also lead to some localized flooding, so that’s rapid water rises not just involving rivers but gullies, creeks, and areas that don’t generally get a flood warning associated with it” Mr. Russell said. 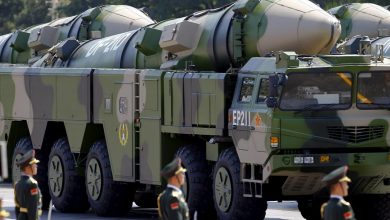 Editor says “long-range strikes“ should be targeted at Australia